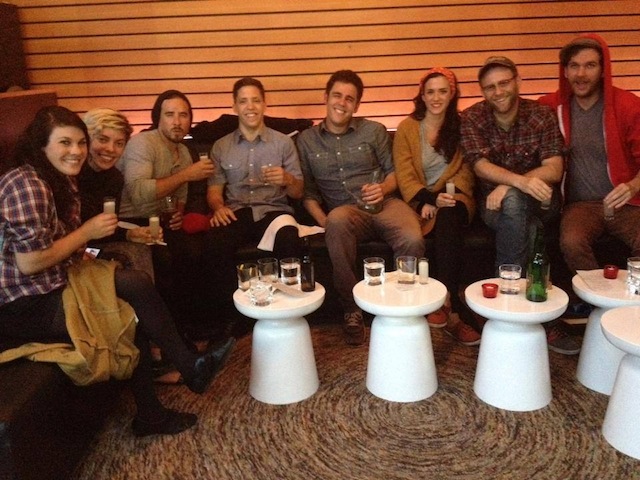 Tom Jones voice is an integral part of Fox and Woman/ Split Screens tour. Driving from San Francisco to Portland, we blared Tom Jones. After a gig in Cottage Grove, we danced on the sidewalk as Tom Jones’ “In Style and Rhythm” blared from the van’s open doors.

We’re having a great time drinking out of a porron, and enjoying each other’s tunes. Fox and Woman is killing it if I may say so myself. Their new record sounds even more powerful when played live (but make sure to buy their album here). I also played tunes from Debbie Neigher’s forthcoming album. Super fun. We’ll be playing in Davis next month.

We’re in Spokane now after reuniting with Split Screens’ old tour buddies, Terrible Buttons, who we played with on our Southern California in February. Playing Mootsy’s Bar last night was raucous and awesome.

Now enjoy the story of tour as told by Vine posts and pictures. Also, shows. Check out the shows.

Phil Summons Scott Stapp, Sings Creed
The running joke on tour is that Phil is slowly morphing into Creed’s lead singer, Scott Stapp with his hair, flannel and undershirts. In this video, the transformation is complete.

The Band Dances To Tom Jones
As previously mentioned, when we roll into a new town, we blare Tom Jones – and dance.

Check out the shows page for information. We’ll be in Seattle tonight. Follow Fox and Woman, Split Screens and Debbie Neigher on Twitter.